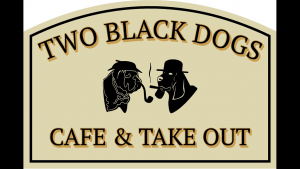 Serving Lunch and Dinner 11am til 8pm

Chef and owner Bill Haines opened his first restaurant in 1984. The Back Yard restaurant was a little outdoor café located in the seasonal summer resort of Stone Harbor. The restaurant quickly became one of the local favorites in Cape May County and was routinely on the list of the best of the shore in the Atlantic City Press. The restaurant is still open today.

From there Bill was able to become a partner at the Avalon Golf Club and opened “Tavern on the Greens”, a country club grille and the Country Club Tavern. Bill sold those ventures and opened a Maryland style blue claw crab house right on the beach in Avalon.

While in Avalon he bought the landmark restaurant, the “Rock’n Chair” and created the hottest spot in town. There was a jazz and blues club in the restaurant where lunch, dinner and the nite club operated year round. The club was voted the best of the Jersey shore for live music.

While operating the Rock’n Chair a little bistro became available next door and Bill opened “Chaise Fine Dining.” The baked brie and smoked salmon torte was voted best appetizer of the year in the Atlantic City magazine and that dish is on the menu at Two Black Dogs Country Pub.

The Jersey shore has become, too short of a summer seasonal resort, so Bill went to Key West and became the executive chef at the “Bagatelle” on Duval Street.While in Key West Bill took the first place honors for best appetizer in 2005 and was runner up in 2004 for best entrée. A friend was opening a sports bar in the USF area so Bill moved to Tampa and helped him open the “Bull Ring Sports Bar.” He then worked at Bern’s Steak House and was the General Manager at “Bernini.” 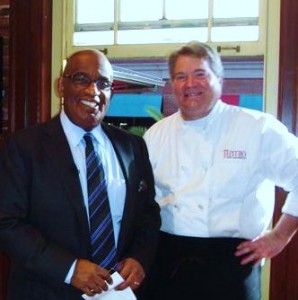 Another opportunity came along and Bill, with his wife Leigh, opened Teatro on Seventh in Ybor City. Bill was a guest of the Today show with Al Roker and hosted “the Best Damn Sports Show” during the super bowl, 2009.

The struggling economy in Florida forced them to close and move to one of Leigh’s favorite parts of the country, Maine. Bill became the sous chef at Stonehurst Manor and the chef of the North Peak Lodge at Sunday River Ski Resort. At the end of the ski season Bill was searching for a job or a new place. The location formerly owned by Maestro’s became available, so Bill and Leigh jumped at the opportunity. They opened Two Black Dogs Country Pub in May 2011. The pub is an olde English Style Pub with Fish and Chips, Steak and Stout Pie and Bangers in a Blanket, as the British favorites. After a three year run in North Conway, Two Black Dogs Country Pub moved to Fryeburg where it spent 5 years entertaining the locals and visitors of the Mount Washington Valley.  The third edition of Two Black Dogs Country Pub is in the historic Tompson House in Standish, Maine.  Leigh and Bill fell in love with the old building and felt as though the year round community will be a fit for the Pub.

Unfortunately, the Coronavirus has affected the Two Black Dogs Country Pub and we were forced to close.  But, we were able to make the best of it and relocated where we came from in Cape May County, NJ.  Two Black Dogs Cafe and Take Out has opened in Green Creek, NJ along the Jersey shore, close to Cape May.  The menu has remained almost the same, we have 6 tables available for eat in dining and we offer take out for the entire menu.  We allow bring your own alcohol since there is no liquor license. 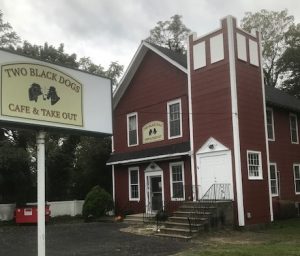